Do you have difficulties making a decision? 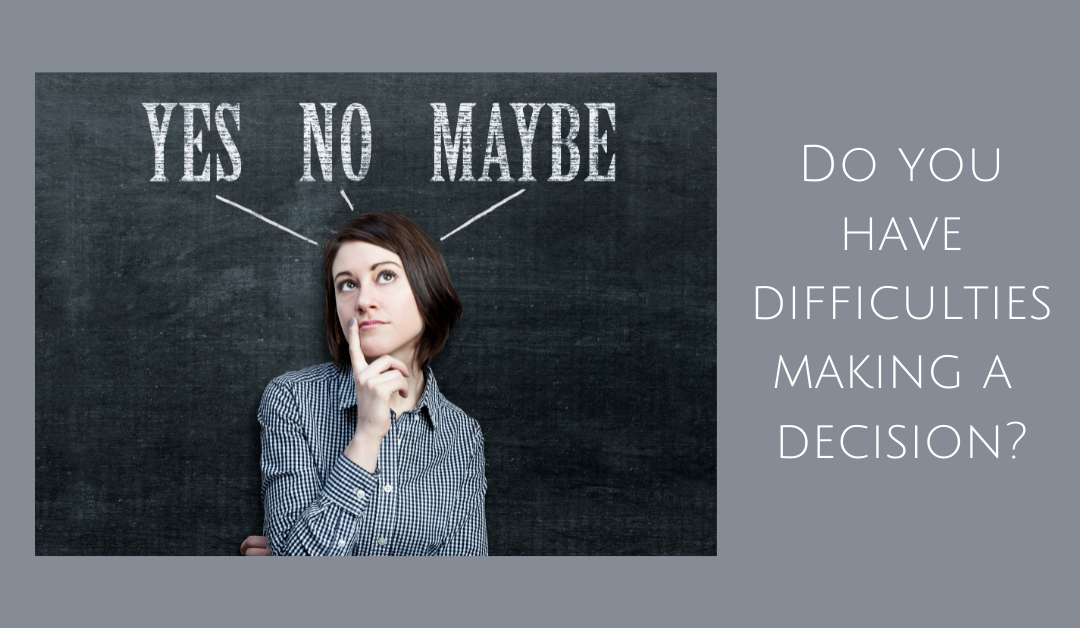 Do you have difficulties making a decision?

Let me introduce you to Danielle.

She came to me for help because she wanted to know what was “wrong” with her. Danielle felt like she couldn’t make a decision even after getting advice from her friends, family and the web.

Everyone just told her to “trust your gut” or “listen to your heart”, but she felt broken because she didn’t really know how to do those things. It was around her 40th birthday when she realized that her life was passing her by. She felt so bad about missing out in her life.

One day, she saw one of my posts online and took a chance to set up a conversation with me even though she felt unsure in reaching for help.

She knew in her head that it “should ” be easy to “go after ” what she wanted; however, she felt like she was missing the “confidence” gene to be able to listen to her gut or her heart. It was that icky feeling of not being able to trust herself to speak up for what she wanted that was bothering her even more at this time in her life.

Where did these feelings of self-doubt begin?

Danielle told me about her upbringing in a family in which her father had made all the decisions. Her mother was basically the obeying wife/mom who was submissive to his choices and didn’t make a fuss.

She spoke of a few examples from her childhood. Like the age when she got really excited to join certain clubs, teams or go on trips. Her father would quickly dismiss her feelings and desires, and always told her “No.”

He would say that “it was a waste of time”, or “you can’t trust those people”, or “we don’t have the money for silly things like that”.

Danielle remembers being so disappointed and broken hearted because she couldn’t join so many events and make friends. She had to always say “No” to so many opportunities because of her father; therefore, she just stopped asking.

Sadly, her mother couldn’t have an opinion because her father continually reminded the family that he was the breadwinner. He always said “I know what’s best and I make all  the decisions for family.”

Throughout our sessions, Danielle came to realize a theme in her life. Disappointment and rejection became the norm. Over time, she became more like her mother and believed that it wasn’t her place to speak up for what she wanted and so, she stopped wishing and dreaming.

Danielle was truly stifled in her ability to listen to her desires. She didn’t even get to “practice” going through the process of deciding to do or not do something on her own.

It occurred to her that she had learned early on to stop listening to her feelings of excitement, passion and anticipation for new and better things in life.

Could it be that you aren’t sure of yourself and don’t trust what you really want?

Through our conversation, she realized that she continued to dismiss her wants and needs throughout her youth and into adulthood.

She dated men who were like her father. Men that would tell her what to do and dismiss her insights and feelings of excitement. She stopped listening to her gut and her heart because, deep down, she believed that her inner desires were not worthy of noticing.

I listened to her story, allowed her to shed a lot of tears for the emotions she held for so many years.

I told her this.

“Danielle, it’s time to relearn how to connect deeply to your desires and develop the intuitive “muscle” to become skilled in being you again.”

She cried tears of joy and said with pure innocence and excitement, “Let’s do it!”

The power of a Transformational Coaching Journey

Over the course of 6 months, she learned at the age of 40 how to tap into her feelings again.

Danielle was finally able to experience her intuitive whispers of wanting, imagining, and feeling the exhilaration that she had turned off years ago. Her face lit up with such excitement and joy as she savored those pure and innocent feelings again.

With my guidance and tools, she became skilled at the process of making a decision based on her unique wisdom. She created this new habit and practiced it regularly.

It was with her repeated process of tapping into how SHE felt, to what SHE was thinking, and wanting; that she developed the trust in herself again.

Danielle successfully decided to end a marriage that was stifling her. She moved away to another state to live by the beach. It was a place that she once dreamed of going to but never felt confident enough to take the chance.

That’s the beauty of transformational coaching and helping you tap into the emotional skills that you may have never learned or were stifled by an outside influence early on in your life.

Awareness of your need for help

Getting to the very deepest root of your issues

Removing the obstacles or blocks out of the way

Letting go of the old and designing the new

If you are reading this and this story resonates with you, let’s have a conversation. click the link for a 30 Min. Discovery Session with me: https://deniselynnmorrison.com/schedule/

​​Looking forward to chatting with you,